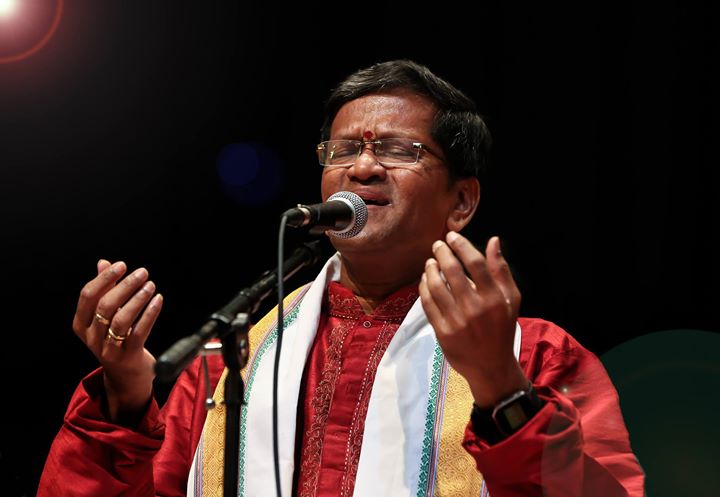 Neyveli Santhanagopalan is a unique musician, an accomplished Vidwan (performer), an erudite scholar, an inspiring Guru, an innovative educator, an eternal learner and a friendly celebrity. Neyveli Santhanagopalan is an internationally acclaimed senior Carnatic musician who is known for concerts that mark a traditional classicism. Well-known for rendering effective concerts couched in ‘Bhakthi’ (devotion) and ‘Bhava’ (emotion), he spiritually elevates his technically intricate music to the pedestal of divinity. A musician is often revered by his ability to justify innovation while carefully balancing tradition. Neyveli Santhanagopalan is an expert performer who consistently communicates with his audience through this process of balancing innovation and tradition. He is known to portray a vivid, sometimes a subtly flashy image of even traditional raagas like Bhairavi, Thodi and Keeravani.

Sri Santhanagopalan has given critically acclaimed concerts in Vidwath sabhas in the presence of other erudite musicians and has been recognized with several accolades and titles. He is also an excellent speaker known for his wit, timing and sense of humor which make him a very wholesome entertainer and performer. Sri Neyveli Santhanagopalan is well-known all over the world. He has represented, influenced and preserved our rich culture in several ways and has touched several hearts all over the world.