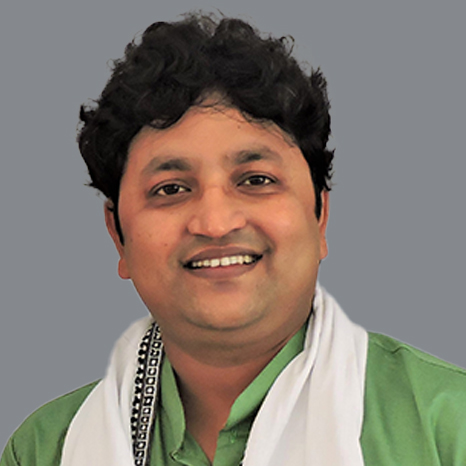 Dr. Rahul Prakash is a ‘B- High’ graded approved artist of All India Radio and Doordarshan, Prasar Bharti, Govt. of India. He is a young performing artist representing fourth generation of Indore Gharana established by Padma Bhusan Ustad Amir Khan Sahab. He has performed in various cities of the country on numerous occasions. He has been awarded Ph.D. on the Topic ‘Hindustani Shastriya Sangeet Mein Ritukaleen Bandishon Ka Sangitik Vishleshan’ in 2021.He was fortunate to perform as a group member in front of the President of India, Sh. Pranab Mukherjee (2014), the Prime Minister of India, Shri Narendra Modi, Finance minister Shri Arun Jaitley (2016 &2017), and Vice President, M. Hamid Ansari (2012). Apart from being an eminent musician, He has also Published a Book Titled “Hindustani Shastriya Sangeet Mein Ritukaleen Bandishen Evam Raga”. He is a distinguished scholar with a number of research paper publication in reputed journals. He has presented several research papers in international and national seminars. He has been an Assistant Editor of ‘SANGITIKA’, a peer-reviewed UGC listed journal on Indian music. Working as Assistant professor, University of Delhi since 2016